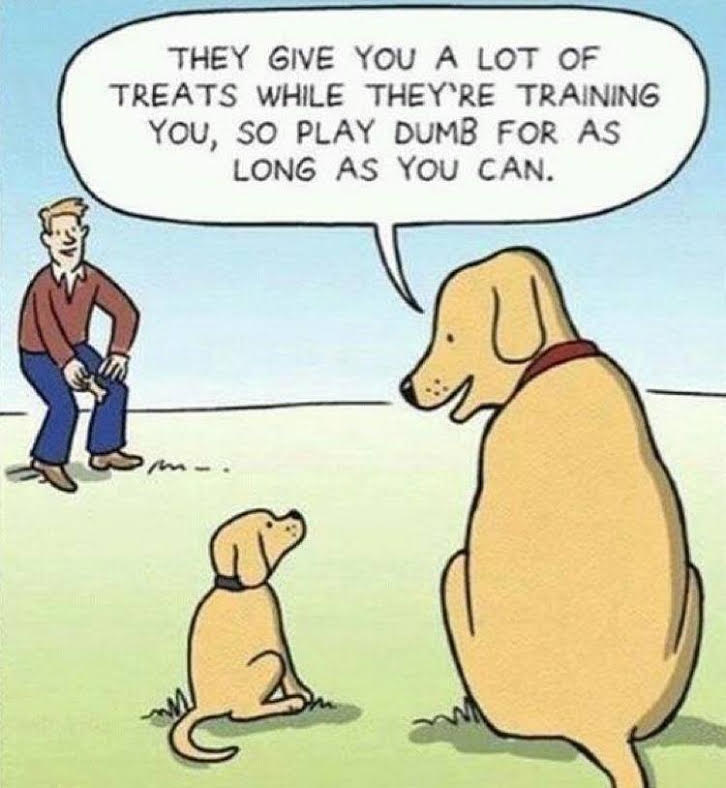 Puppies are taught communication skills by their mother and littermates at an early age. In addition to vocalizing, they learn communication via body language. Just as we humans use body language to emphasize or reinforce what we’re saying, so do dogs. For example: a dog burying a bone, interrupted by another dog, might turn up its lip in a snarl and growl. Its tail may wag slowly, held up high, perhaps in a show of dominance. It is up to the intruder to interpret these gestures as defensive, perhaps aggressive, and respond accordingly.

We see other examples in dog play. A dog may vocalize high-pitched, excited barks while running circles around an object. At some point the dog may exhibit a bow – the rear end sticking up in the air while the front half stays low to the ground. In this position the tail may again be held high and may be wagging. But this is not a dominant position; one can almost see joy in the dog’s face. How to tell the difference? Most dogs usually can, humans have a more difficult time.

It is crucial for us to take in all the information the dog’s body gives us: aural and visual.This means listening for sounds while looking at ears, eyes, and lips. Observe the hair behind the dog’s neck and shoulders, along the length of its back — is it raised? Look at the position of the tail. A dog that is frightened or unhappy will not have a wagging tail, and may not even look at you. On the contrary, an excited or happy dog will have its ears erect, facing forward, the tail probably held high, wagging fast in anticipation. Ear position also says a lot. Pulled back close to the head can signal different things — fright, aggression or happiness — depending on what the rest of its body is communicating. Canine facial expressions, even down to the size of the pupil, also communicate a distinct message.

These examples demonstrate the way a dog’s body sends the same message as its voice. It is critical that the human pack not only be able to decipher these messages, but also communicate them in order to elicit responses that affect the dog’s behavior.

By being aware of and paying attention to these voices and gestures, human pack leaders take steps toward interspecies communication and more rewarding relationships with their dogs.